Tracking the usage of your Shortcuts has never been easier. 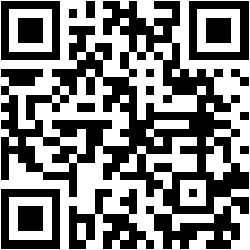 UsageKit was designed to give you detailed information on not only how you use your Shortcuts, but how frequently you use them.

Caution: This Shortcut is currently in beta, you may experience issues.

28-7-2019: Due to the changes made by Apple in the latest version of their operating system, any Shortcut created using iOS 13 (and iPadOS) will no longer be compatible with earlier versions such as iOS 12.

Note: iOS 13 is not yet supported, sorry for the inconvenience.

With UsageKit, any data collected from supported Shortcuts will remain on your device and offline.

The biggest concern for anybody when it comes to implementing UsageKit will most likely be the impact it has on performance. Due to the way UsageKit works, it will have next to no impact on your performance.

If you use more than once device, UsageKit will only show you statistics for the device you’re currently using.

UsageKit features a simple, data fuelled interface that keeps the important information at your fingertips. When you run UsageKit you will be greeted by a list of supported Shortcuts and the number of times you’ve run it. When you make a selection you will be presented with more detailed information about the statistics that Shortcut is monitoring. 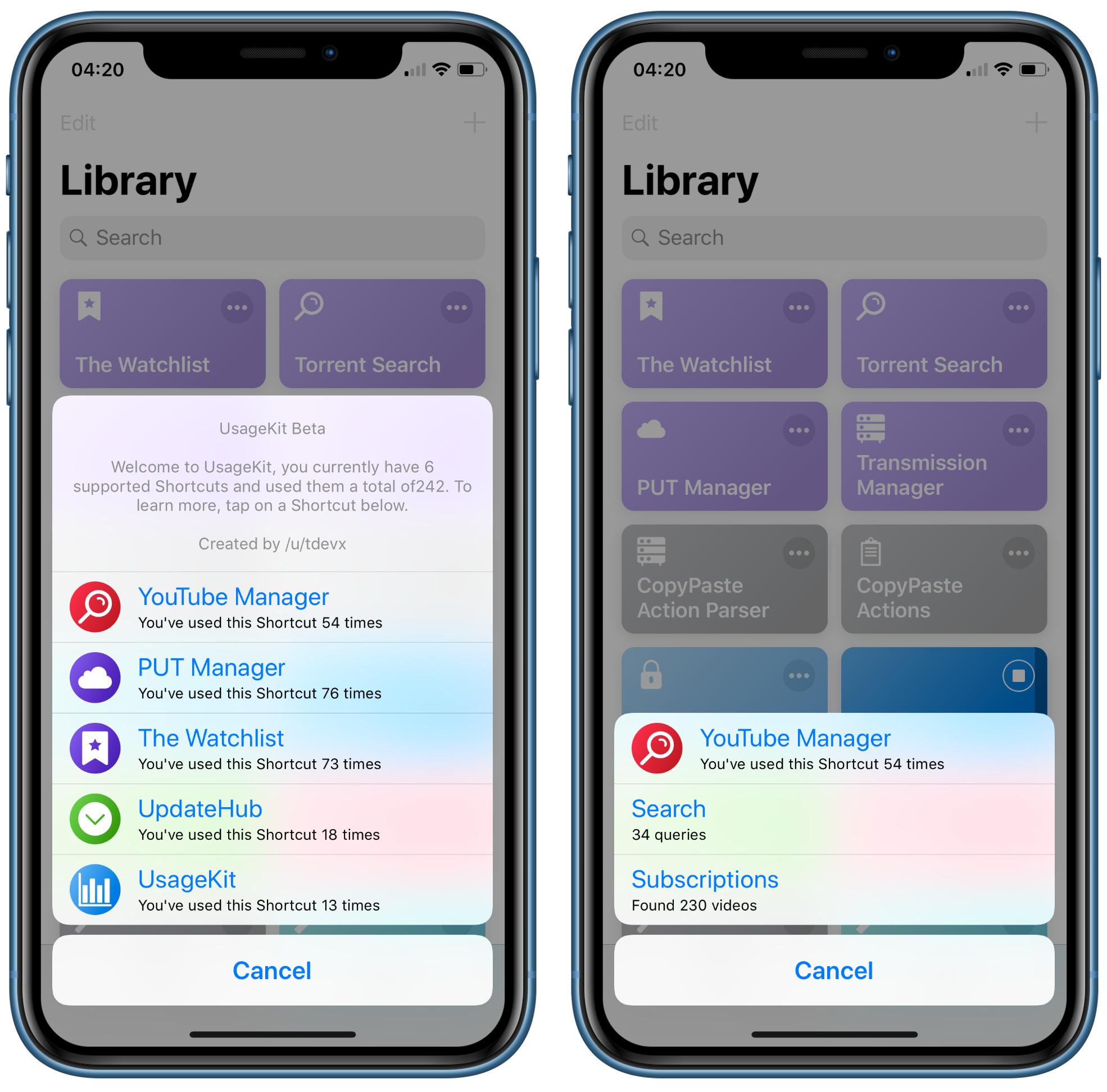 Below you will find detailed instructions on both the basic and advanced implementation of UsageKit. The basic version will only require 4 Actions from you, and the advanced version will use a minimum of 5 Actions. To see this in action, use the DEMO provided.

The basic implementation of UsageKit only requires 4 Actions, this particular method is only used for 1 input and is required at least once in every Shortcut.

To get started, place a ”Get My Shortcuts Action” and add an ”If Action” after it. Set the If Action input to ”Contains” and enter ”UsageKit” into the Value.

Next, place a ”Text Action” and paste the text from the template below into the box.

Third Line: The third line will be the name of the statistic. For example, if your Shortcut is tracking downloads, you would set your statistic name to “Downloads”.

Fifth Line: The fifth line will be used to display your Shortcut satistics and must include “{{NUM}}” (you may place any text around this). For example, if your Shortcut is tracking downloads, your your last line will read {{NUM}} items.

And to finally finish the basic implimention, add a ”Run Shortcut Action” at the end and link it to UsageKit.

Note: It is required that you use the template above at least once near the beginning of your Shortcut. This will be used to calculate the total times you run a Shortcut and is needed for the main menu. 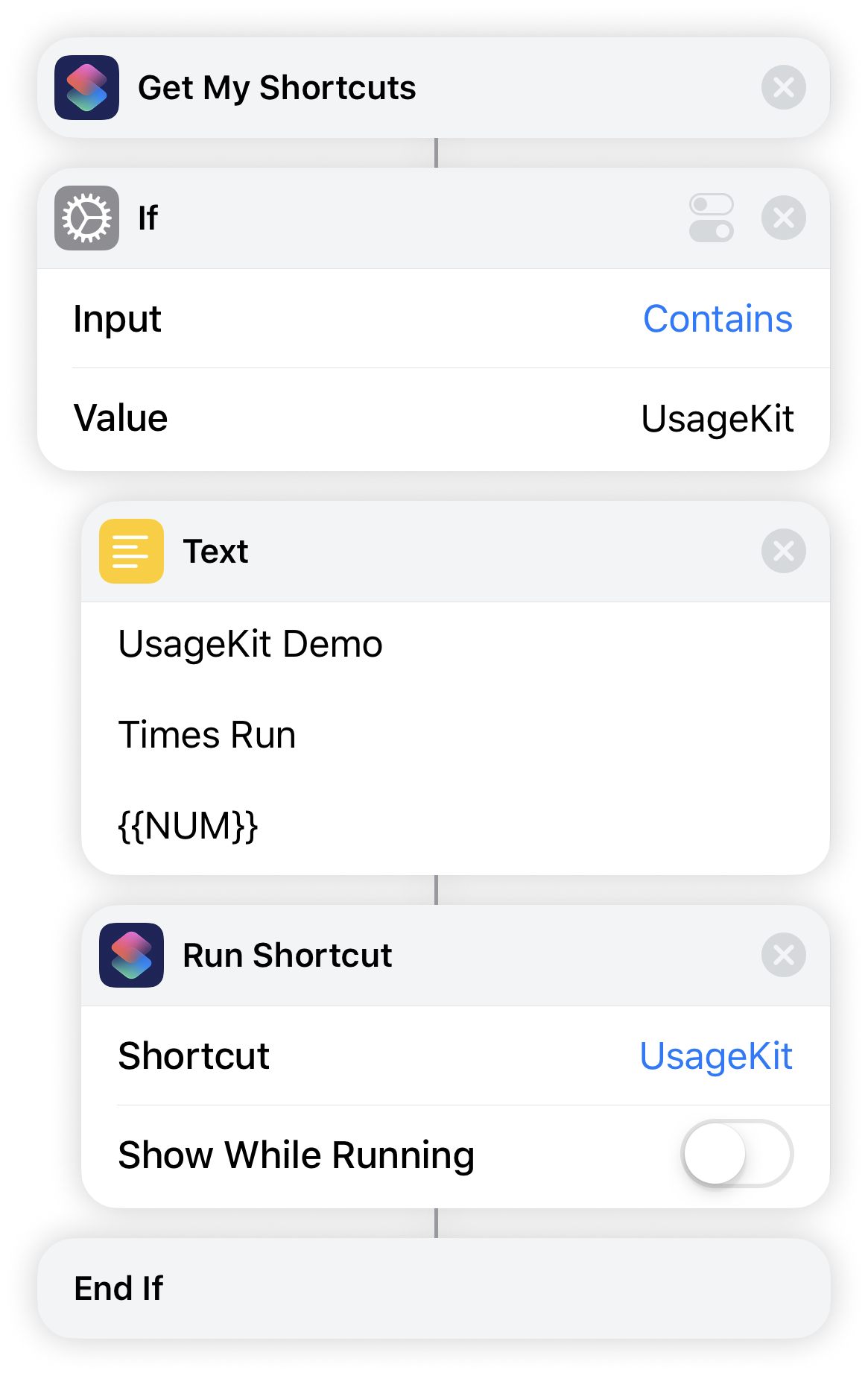 The advanced implementation of UsageKit requires a minimum 5 Actions, this particular method is only used to send multiple statistics to UsageKit at once. 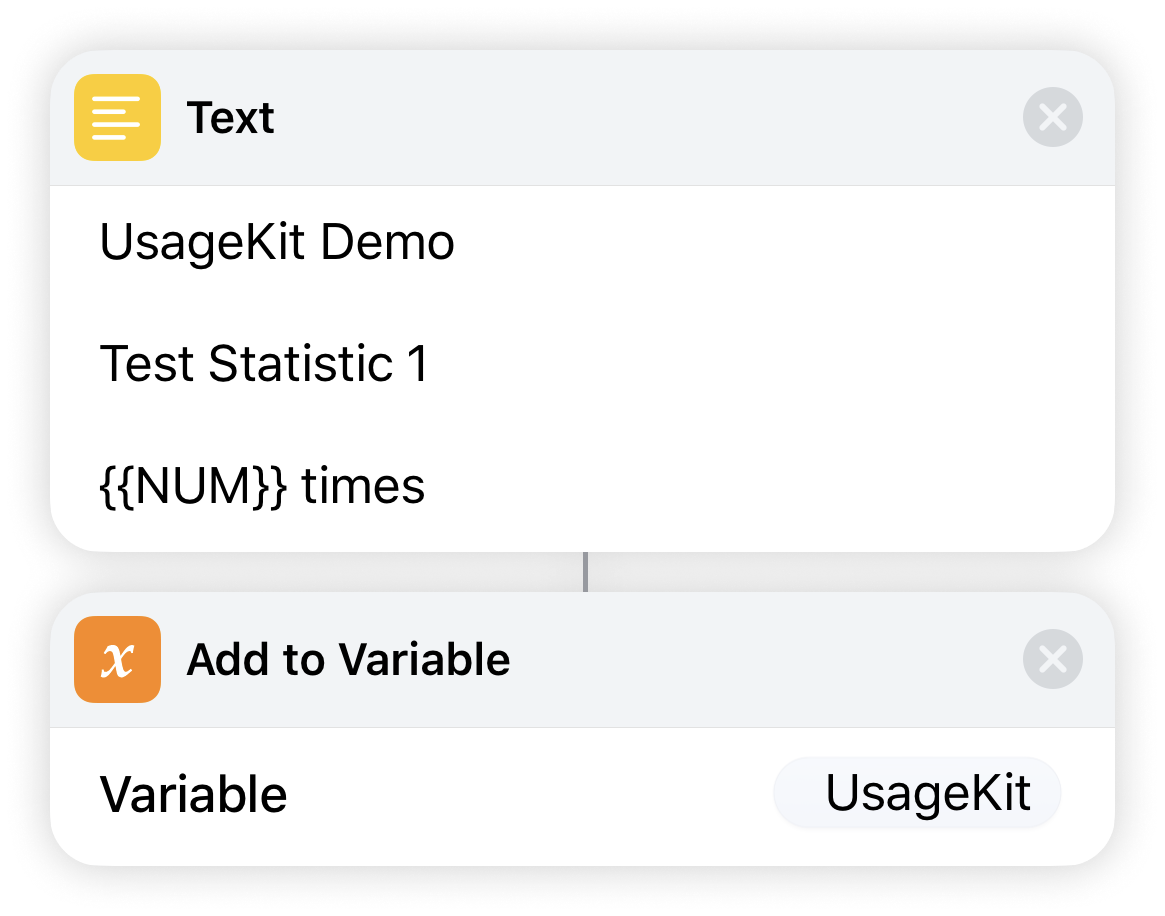 To get started, place a ”Text Action” and enter the required information (see basic input). Then add a Add to Variable Action” and enter ”UsageKit” into the name (you can repeat this as many times as you like throughout the Shortcut). 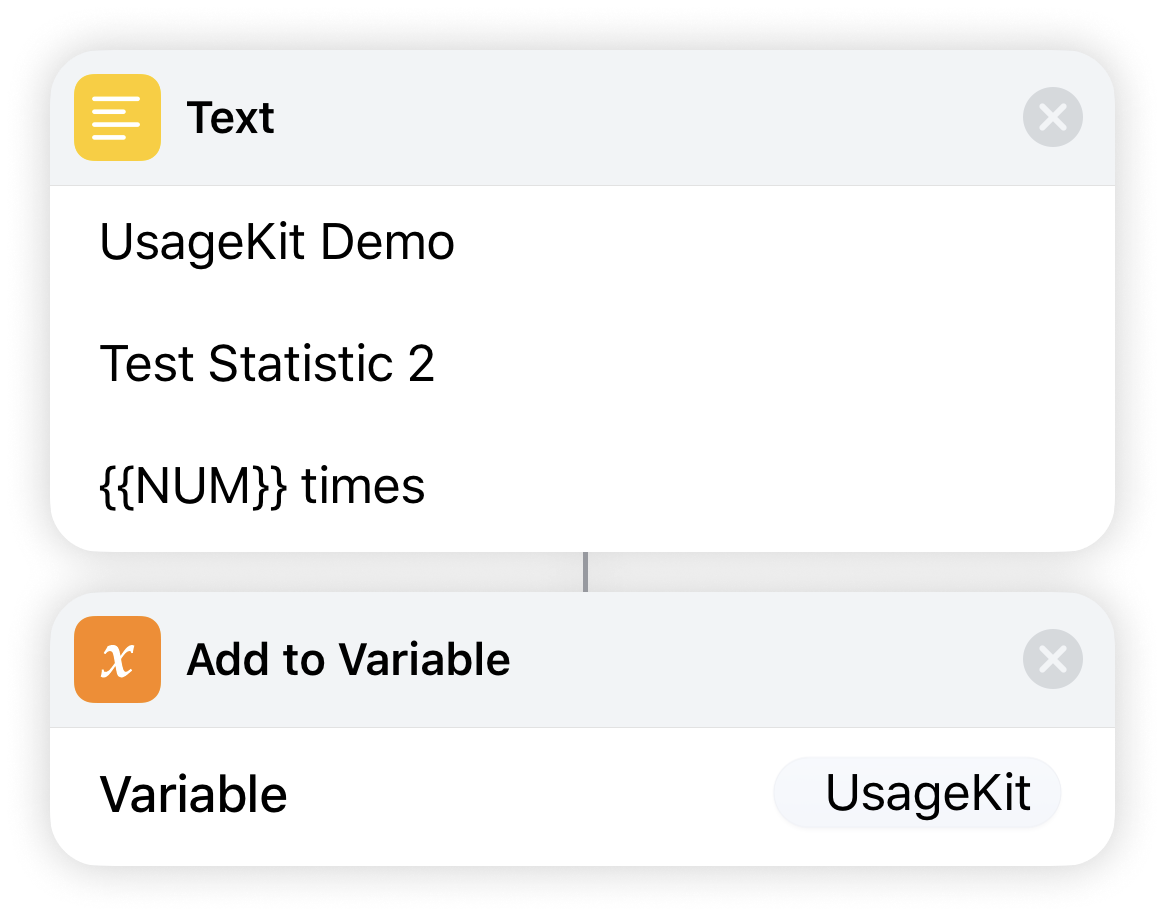 Near the end of your Shorcut, place a ”Get My Shortcuts Action” and add an ”If Action” after it. Set the If Action input to ”Contains” and enter ”UsageKit” into the Value.

Finally, add a ”Get Variable Action” linking to the variable we created and place a ”Run Shortcut Action” at the end and link it to UsageKit. 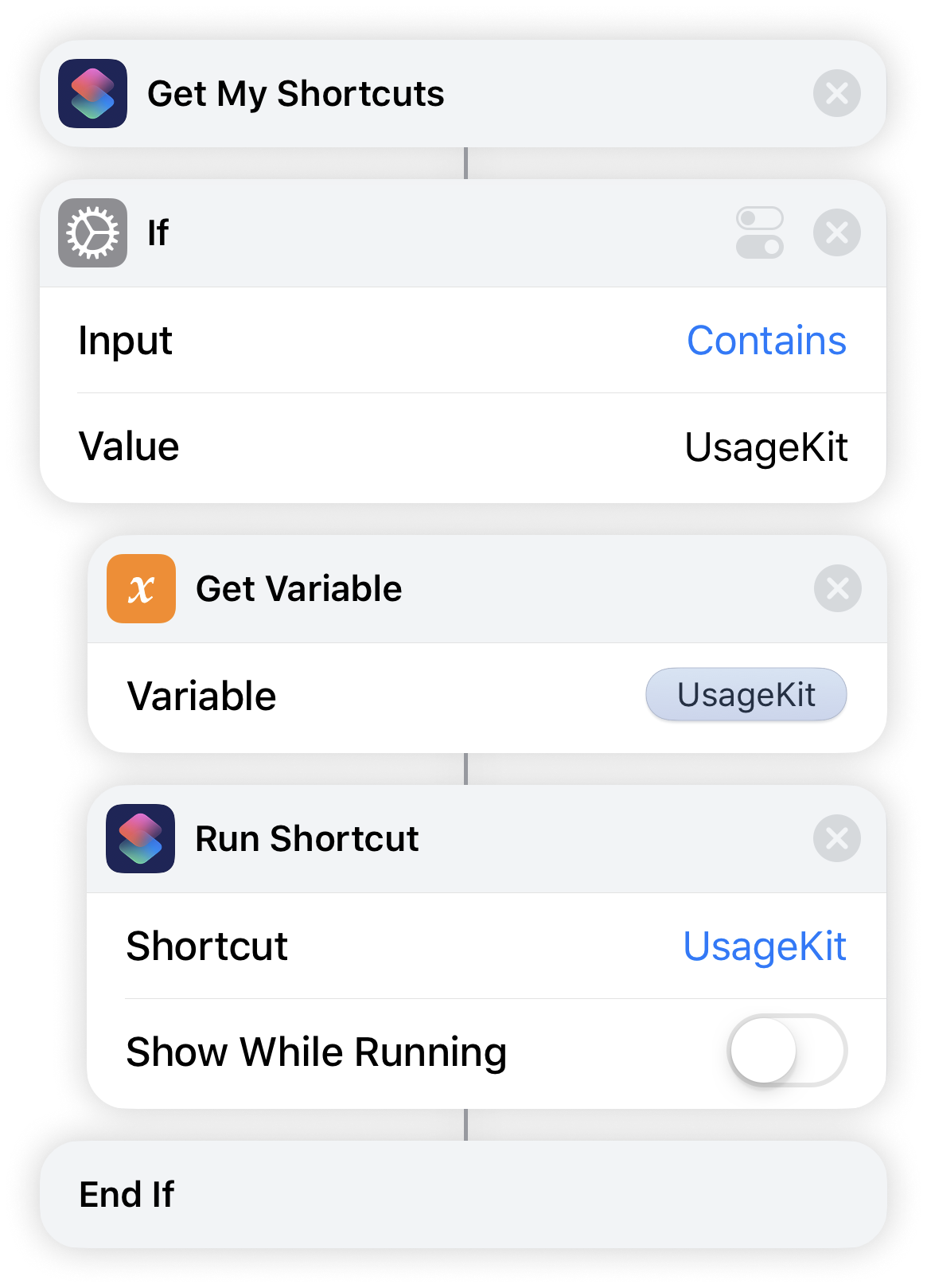 If you feel UsageKit is the right fit for you and your Shortcuts, you may use the following on your RoutineHub page.


@AShortcuts
If anyone needs help with understanding this Shortcut, you can use this: http://bit.ly/2H4B6fZ It helped me understand it.
Reply · 3 years, 9 months ago