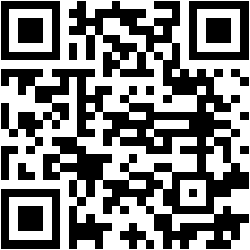 Unfortunately, with iOS 14.5 (and thus far persisting with the early iOS 14.6 betas), Apple introduced a new bug that generates an error when some shortcuts are written to the local iCloud Drive. If your backups and archives generate an error (specifically An error occurred in the destination for the data.), refer to the iOS 14.5 Write Error section below.

2021-05-17 UPDATE: At least when tested with my long list of shortcuts, it appears that Apple has addressed this issue. Starting with iOS 14.6 beta 3 (18F5065a), I no longer see this bug. To confirm that your shortcuts are clean, try running Identify iOS 14.5 Problematic Shortcuts on your updated system. If you do not see an error, your set of shortcuts have been successfully written to iCloud. 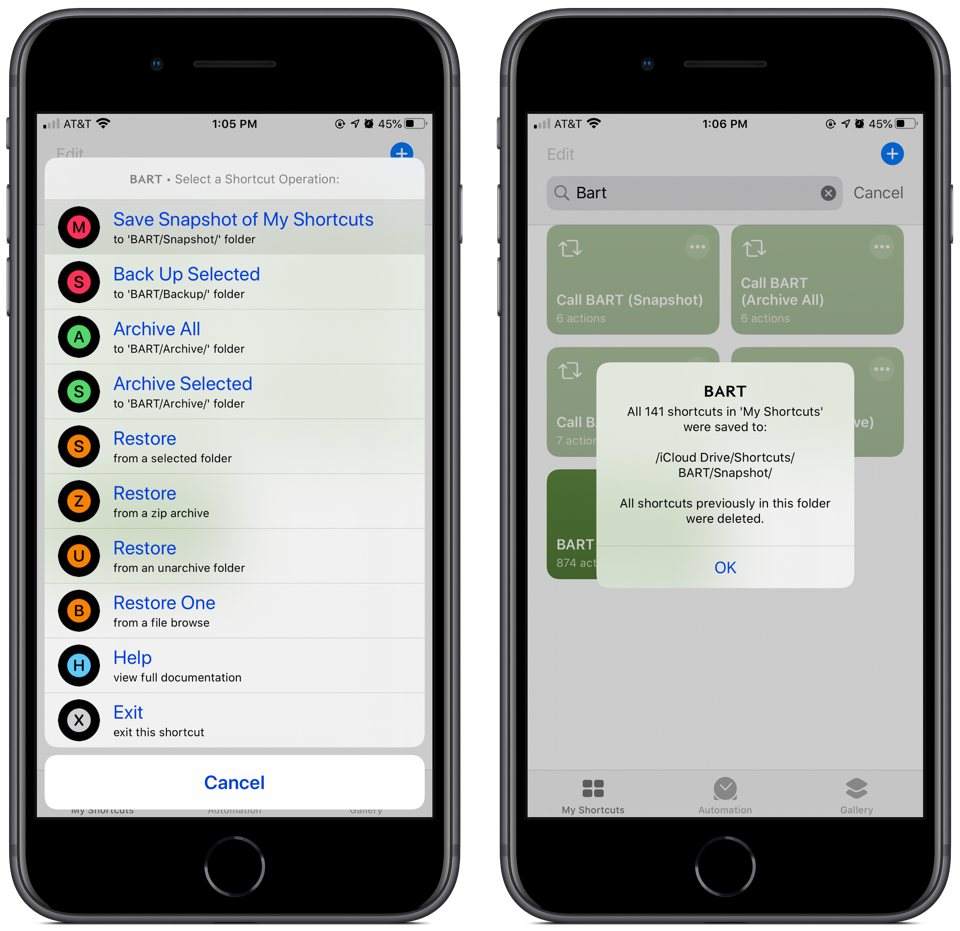 BART is a shortcut that can back up, archive, and restore shortcuts in the Shortcuts app Library, also known as My Shortcuts. It is designed to be full-featured, yet simple and fast to use. In fact, most of the information below can be easily discovered by simply running the shortcut*. However if you prefer to read instructions and/or learn some of the finer points of BART, the following is for you.

* There are a few significant exceptions. For example, running BART from another shortcut, a very powerful yet easy to use feature, is not discoverable (unless you peer into the actions of the BART 😀 ). Therefore, even if you have used the interactive features of BART, you'll find some very useful information beginning with the section Running BART From Another Shortcut.

A video overview of BART is available here. Changes for Version 2.0 are highlighted in this video.

So what's the point?

Short answer: It's always good to back up your work!

Long answer: Stuff happens! On occasion, the iOS Shortcuts app will display an error indicating that the database is corrupt. If iCloud Sync (one of the Shortcuts app settings) is set, the Shortcuts app attempts to recreate My Shortcuts after the error dialog is dismissed. Depending on the circumstances, this restoration can range from a complete recovery to a complete loss of all of the shortcuts in My Shortcuts. If not a complete recovery, shortcut backups are indispensable. Backups are also valuable during more common and frequent events, e.g., if a shortcut is mistakenly modified or deleted.

In addition to shortcut protection, backups can be employed to manage shortcuts. For example, a user might find a group of shortcuts that are useful occasionally, but not want to clutter My Shortcuts with these rarely used shortcuts. Such shortcuts could be archived and restored when needed.

This section includes a short description for each Shortcut Operation on the BART main menu. 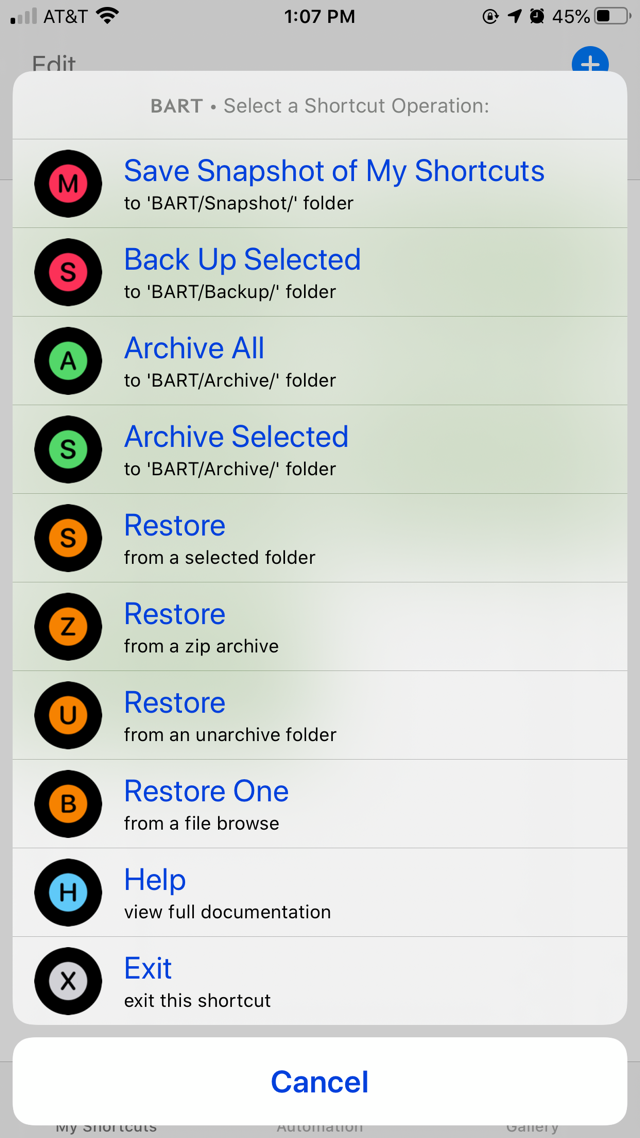 Save Snapshot of My Shortcuts saves a copy of all shortcuts in My Shortcuts to the snapshot folder: /iCloud Drive/Shortcuts/BART/Snapshot/. All files previously in this folder are deleted before the shortcuts are copied to this folder. This is the fastest and simplest way to back up My Shortcuts.

Back Up Selected saves copy of one or more selected shortcuts in My Shortcuts to the backup folder: /iCloud Drive/Shortcuts/BART/Backup/. Shortcuts files in the folder are written over if the selection includes shortcuts with the same names.

Archive All creates a zip archive of the shortcuts in My Shortcuts and saves the file to the archive folder: /iCloud Drive/Shortcuts/BART/Archive/. The archive is named based on the date/time and #x (where x is the number of shortcuts in the new zip archive). For example, the following archive would include 102 shortcuts: 2019-12-10-073522_#102.zip.

Archive Selected creates a zip archive of one or more selected shortcuts in My Shortcuts and saves the file to the archive folder: /iCloud Drive/Shortcuts/BART/Archive/. The archive is named based on the date/time and either: a) #x (where x is a number 2 to n indicating the number of contained shortcuts), or b) shortcutname (if only one shortcut is selected). For example, the following archive would include 102 shortcuts: 2019-12-10-073522_#102.zip and the following would include one shortcut named xyz: 2019-12-10-073522_xyz.zip.

Any other folder in /iCloud Drive/Shortcuts/ can be added to the list by adding it to a List action within BART. This could be useful for users that have used another means to backup and/or organize shortcut backup files. Note: All folder entries are case-sensitive!

This restoration operation would be used to recover a shortcut that was previously archived (using Archive All or Archive Selected) and then subsequently unzipped using the Restore (from a zip archive) operation.

Restore One (from a file browse) will open a file selection dialog to allow the user to select a shortcut file. The selected shortcut will be restored to My Shortcuts.

This restoration operation would likely be used infrequently as it is intended for files that were backed up prior to using BART. This method has the advantage of being more flexible in that the shortcut file can be located anywhere, not limited to /iCloud Drive/Shortcuts/. The disadvantage of this method is that only one shortcut can be selected per file browse.

By default, all files created by BART are saved exactly as described in the above sections. This is appropriate if:

Conversely in cases where multiple iOS devices are being used and iCloud Sync is not being used, it is recommended to segregate the BART files. This change can be made when BART is first downloaded or at anytime later using Settings -> Customize Shortcut.

The Shortcuts app is an updated version of Workflow, a third-party iOS app that Apple acquired in 2017. Although similar, this app included workflows, not shortcuts. Workflow files included a wflow extension and, like shortcut files, can be restored using BART.

BART automates the process described above. However once the link is opened in Safari, a user must complete the final step by selecting blue Get Shortcut button that appears on the shorcut's Safari page. Because of a limitation with the Shortcuts app, this final step cannot be completed if a shortcut is still running. Due to these constraints, only one shortcut can be automatically restored/imported for each run of BART (or any similar restoration shortcut). Therefore if the user selects more than one shortcut to restore, the first one will be restored during that run of BART; shortcuts 2 to n will be queued up and ready to be restored, one at a time, with each subsequent run of BART.

As mentioned above, snapshot, backup, and archive files are saved to /iCloud Drive/Shortcuts/ subfolders, specifically BART/Snapshot/, BART/Backup/, and BART/Archive/, respectively. In addition, BART/Develop/ houses copies of shortcuts that are modified using the Develop operation.

In general, the contents of these folders are managed automatically by BART, but in some cases the contents can be managed manually using the iOS Files app or the macOS Finder. Specifically:

Running BART From Another Shortcut

BART can be optionally started from another shortcut. This is also known as running BART in Input mode. This mode is useful because routine tasks can be automated and run consistently and quickly without user interaction with the BART main menu.

To run BART in this mode, the calling shortcut needs two actions: Dictionary and Run Shortcut.

And the following two-item BART Operations are also supported:

As mentioned above, the above Dictionary action must precede the Run Shortcut action (specifically Run[BART]).

Note 2: If the Dictionary includes Shortcut (Text Key for 1 shortcut_name) and Shortcuts (Array Key for 1 or more shortcut_names), all shortcut names will be used by BART.

The shortcuts mentioned in the previous section, Running BART From Another Shortcut, are great candidates for the Shortcuts app Automation, also known as personal automation in the Shortcuts User Guide. As an example in the two following videos, Archive ➤ BART is used to demonstrate how a full archive can be executed at 11:30/pm everyday.

Protection While Developing or Modifying Other Shortcuts

BART Input mode operations are discussed in a section above: Running BART From Another Shortcut. BART includes one additional operation: Develop. This operation, however, is unique in that it is not available when running BART interactively.

Develop is used to save a copy of a shortcut to the develop folder (/iCloud Drive/Shortcuts/BART/Develop/) and then open the shortcut in the Shortcut app editor. Then, if needed (e.g., if a large block of actions is mistakenly deleted during the editing session), the saved copy can be restored using BART interactively (using Restore from selected folder).

Before continuing, with the following shortcut, download, Duplicate, and open your copy:

Note that this is an example that specifies three shortcuts: Brush Teeth Timer, Log Water, Tea Timer, selected in the example simply because they are available in the Shortcuts app Gallery. In the Dictionary action:

BART combines the single name in Shortcut key with the one or more names in Shortcuts key. After the keys are combined, if the list contains more than one shortcut name, BART will generate a Choose from List so that the shortcut of interest at that particular time can be selected. This is helpful if there is a set of shortcuts that are regularly opened in the Shortcuts app editor.

If only one shortcut name is specified, then BART will copy the shortcut and open it in the editor, i.e., the Choose from List will not appear.

The Copies key defines how many copies of a shortcut will be retained in the develop folder. If this key is not specified, the default value (defined in BART) will be used. Older copies in excess of this setting will be automatically deleted from the develop folder.

The Notify key determines if BART will generate a notification when the shortcut is copied. If this key is not specified, BART will use its Suppress Notifications? Configuration Parameter to determine if a notification should be generated.

With iOS 14.5, Apple introduced a new bug that generates an error when some shortcuts are written to the local iCloud Drive:

Since entries in Shortcuts • Error Saving.txt will not be saved by BART, you might want to manually back up these shortcuts using Copy iCloud Link and saving the links (https://www.icloud.com/shortcuts/shortcut ID) for use in the event it becomes necessary to restore one of the problematic shortcuts.

BART, Version 3.0, has been tested with the following:

Significantly sped up ‘Save Snapshot…’ by changing the method of deleting old files.