Update,Embed,Publish Updates,Check For Updates Without Running Your Shortcuts! (Supports Any Server) 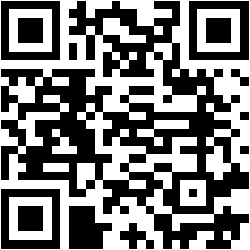 With R⤓Updater you can check for updates with or Without running your shortcuts from the RoutineHub & Shareshortcuts and Custom Server with one of the fastest shortcut.

There are so many shortcut updators out there, so what makes R⤓Updater different than others?

R⤓Updater is the only shortcut that supports all of these features in one shortcut:

One of the fastest shortcuts out there for updating shortcuts

Check For Updates Without Running Your Shortcuts 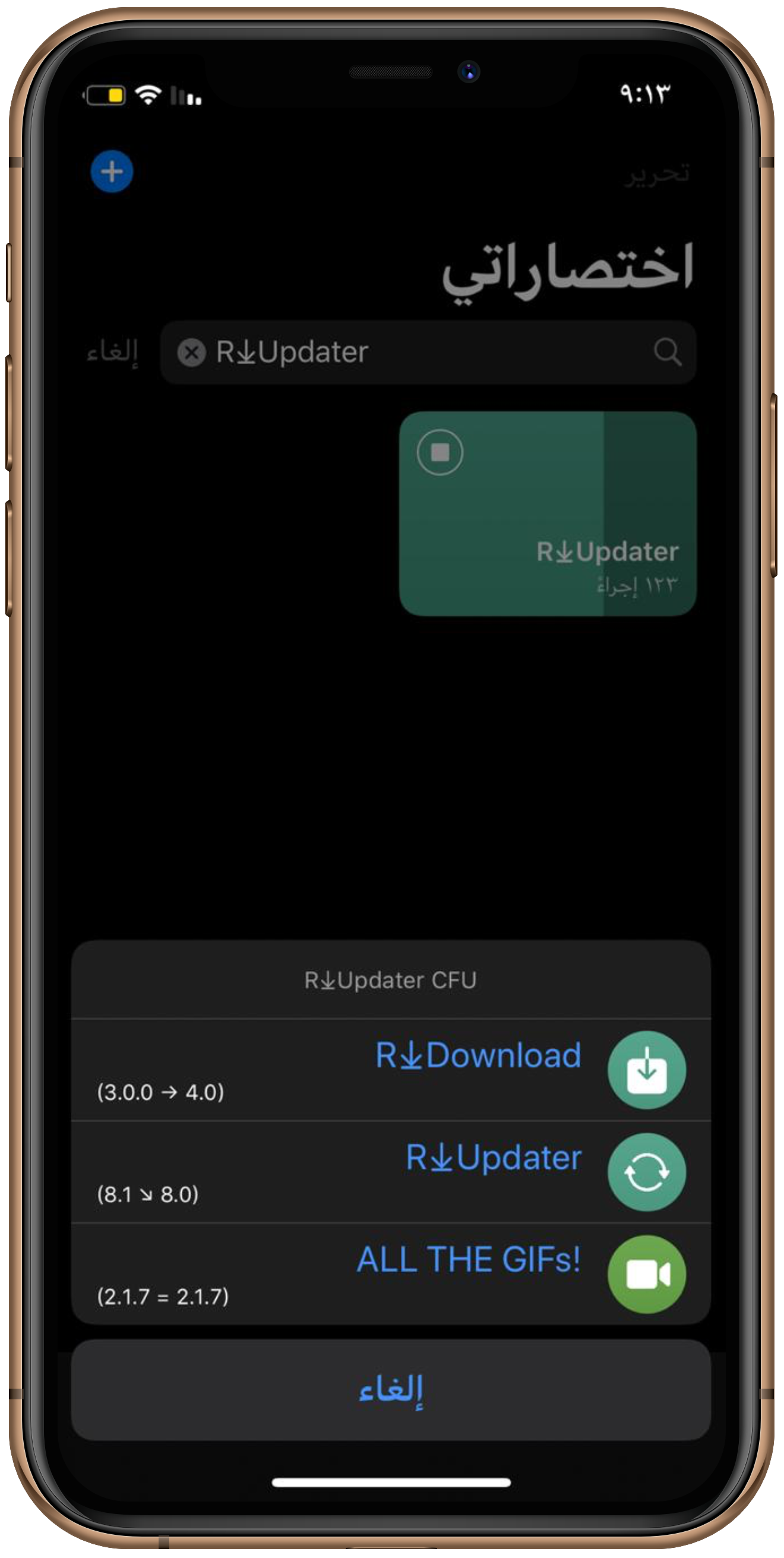 How do I update shortcuts without running them?

The first method: you add a dictionary in a place in your shortcut (you do not need any other actions or a special dictionary). You can use the main dictionary, it doesn't matter!

The dictionary should consist of:

To check for the latest updates using RoutineHub, you can reference the text below: 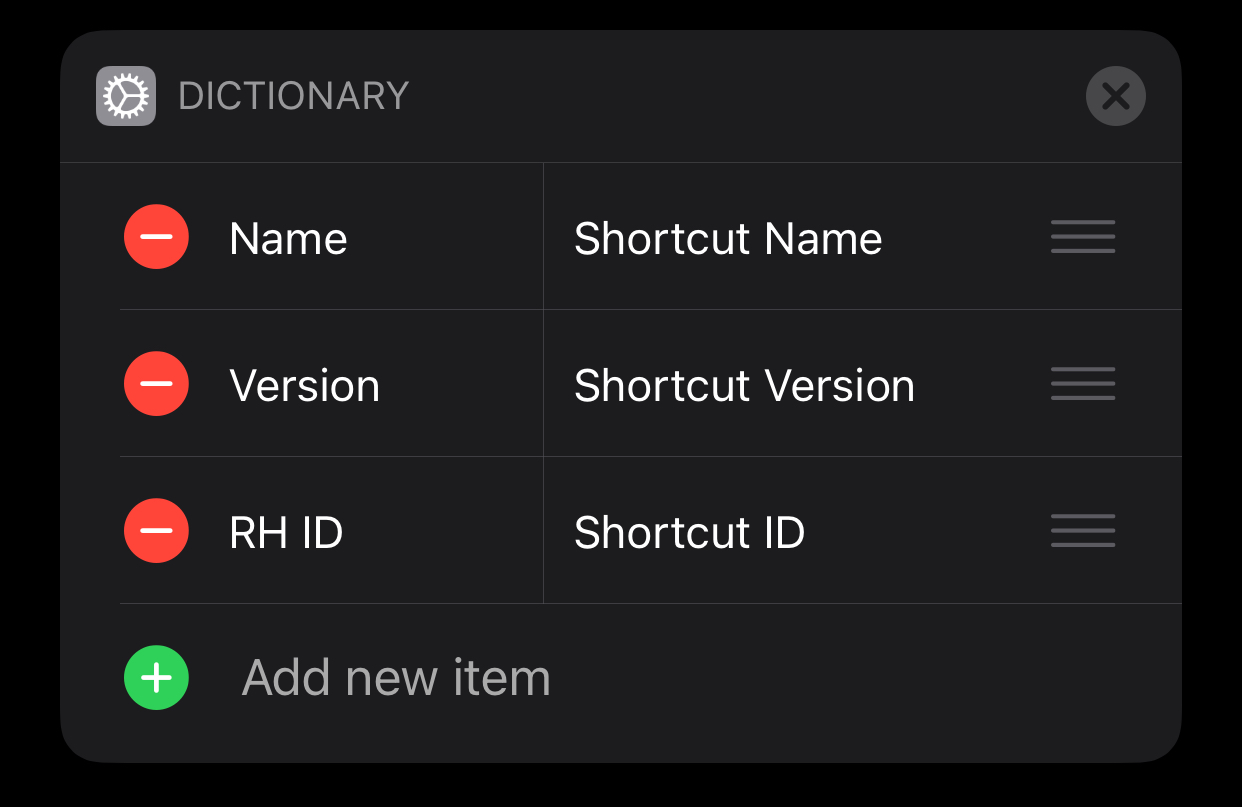 To check for the latest updates using ShareShortcuts, you can reference the text below: 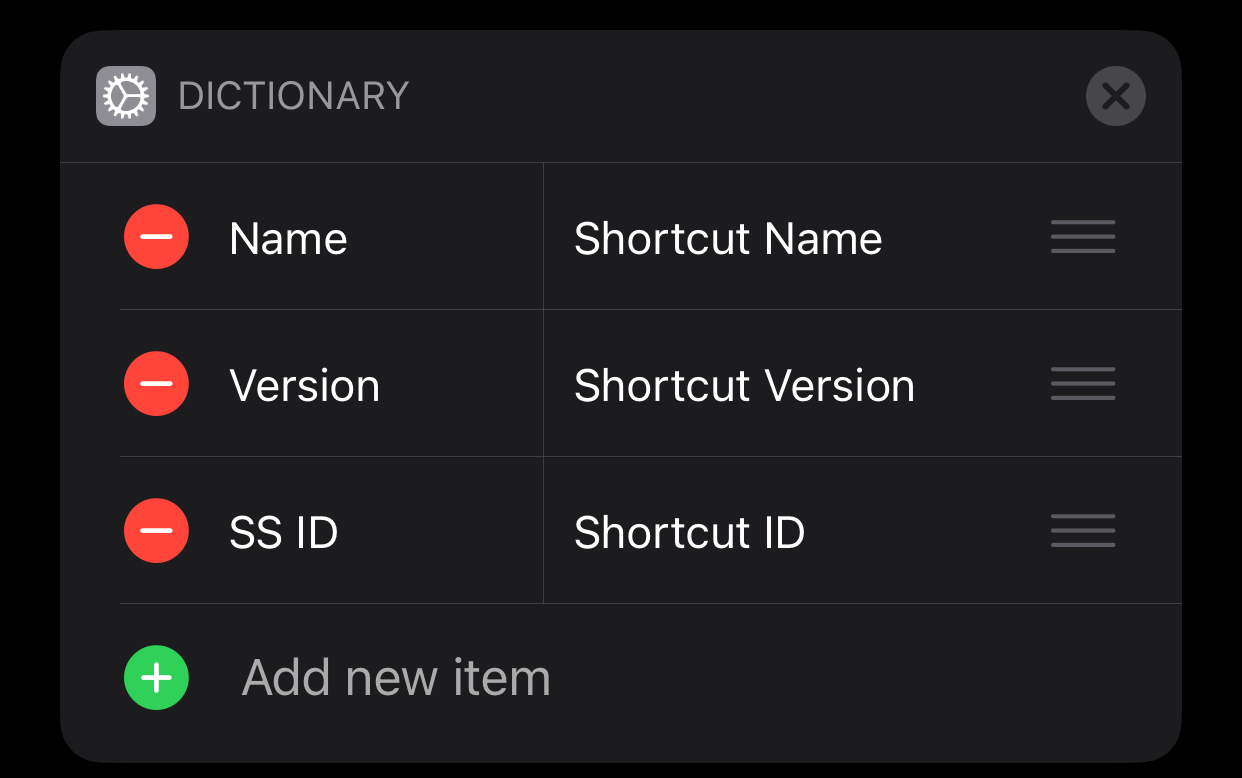 To check for the latest updates using a privately hosted JSON file, you can reference the text below: 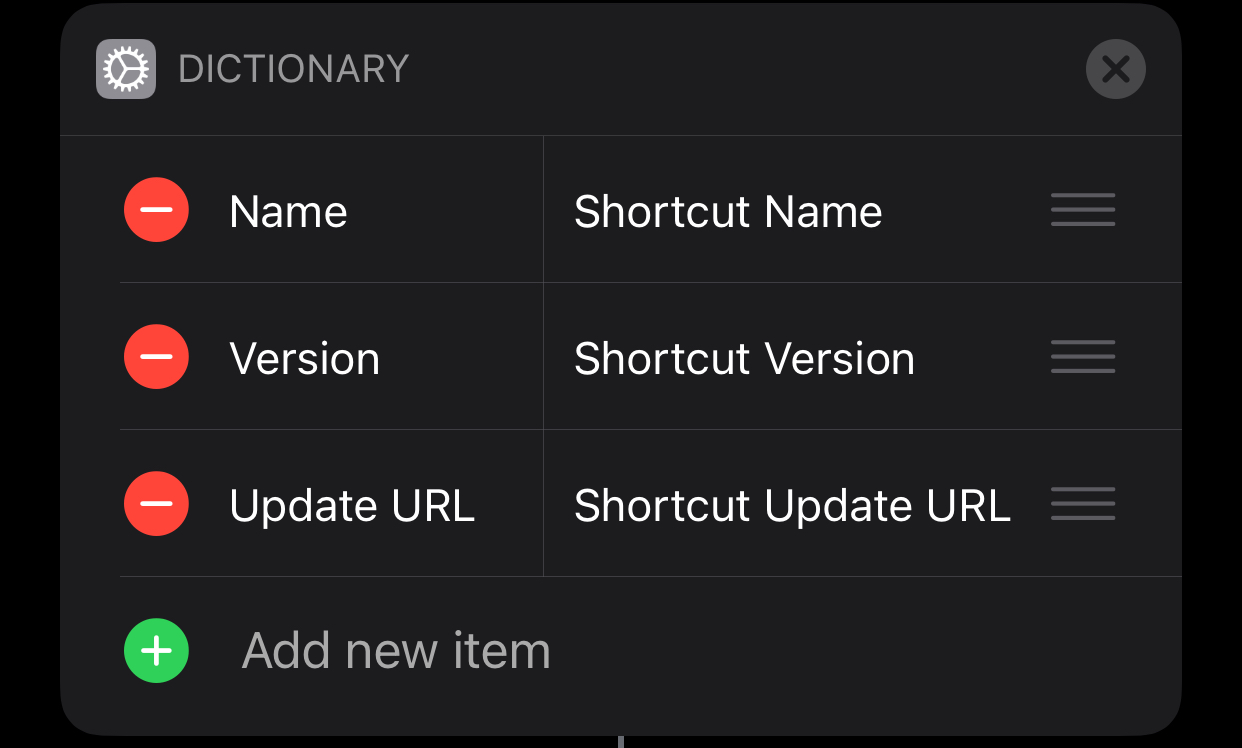 Bulk Search is R⤓Updater’s bread and butter, allowing you to check all of your Shortcuts for updates at once. This is achieved by parsing every Shortcut in your library and fetching the data stored in a ”Comment Action” at the top or Anywhere. This is the only thing you’ll need to add in order for R⤓Updater to fetch the latest updates from RoutineHub.

To check for the latest updates using RoutineHub, you can reference the text below:

To check for the latest updates using ShareShortcuts, you can reference the text below:

To check for the latest updates using a privately hosted JSON file, you can reference the text below:

To ensure your privately hosted JSON file is in the correct format, I recommend using THIS Shortcut to create it.

What does mean (supports all Codes)?

This means that you can use all dictionaries whether you are using RoutineHub or ShareShortcuts, such as: 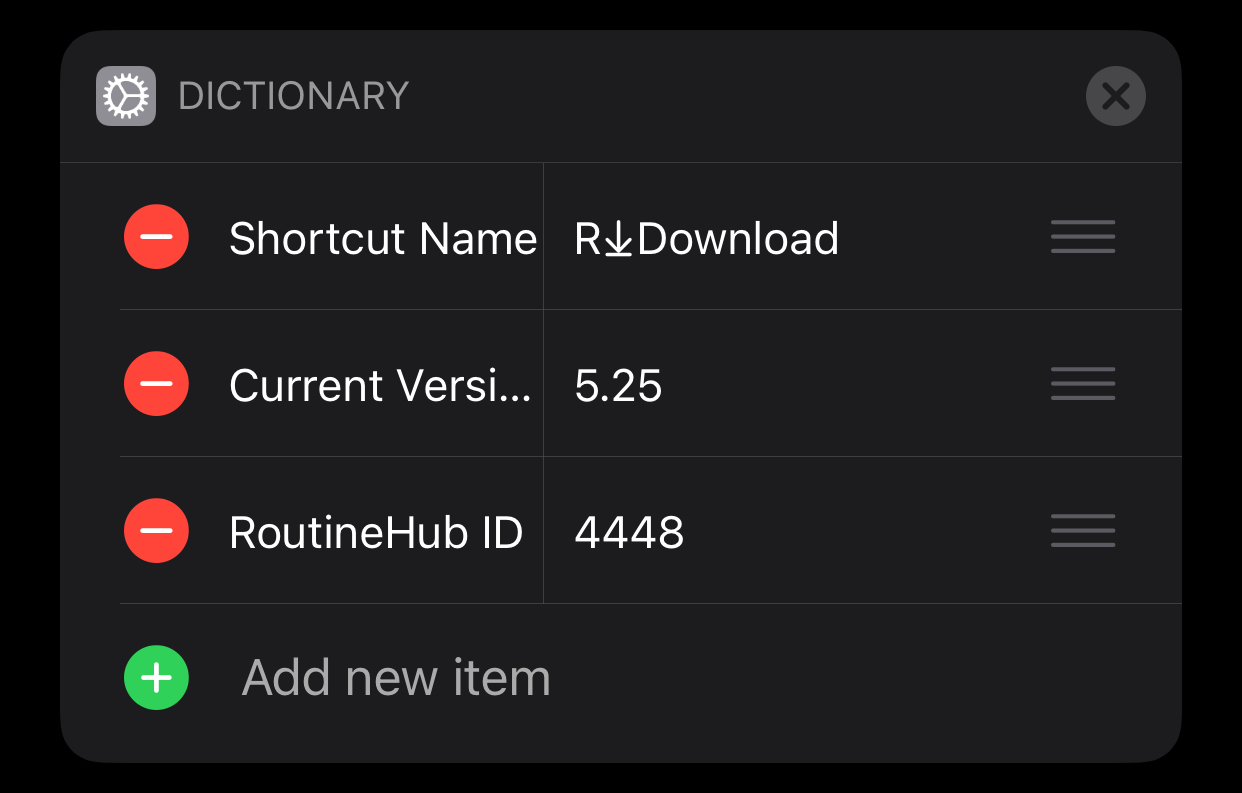 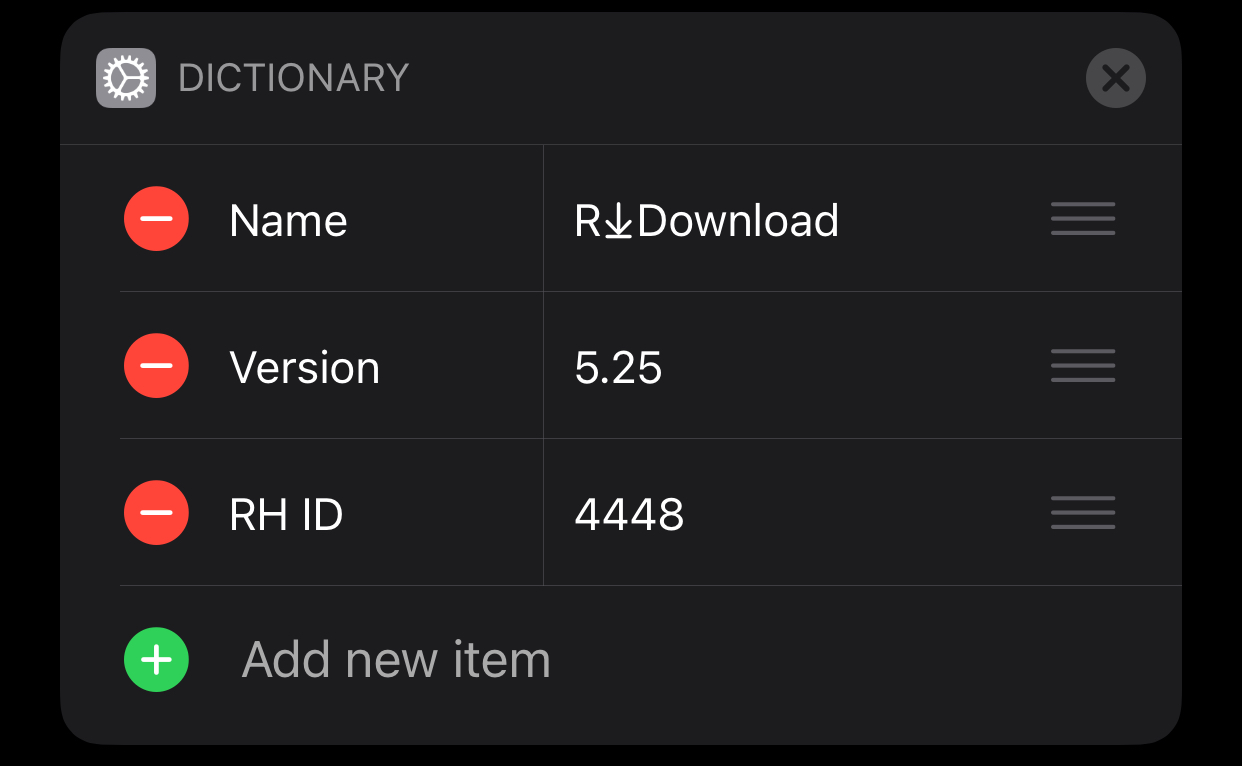 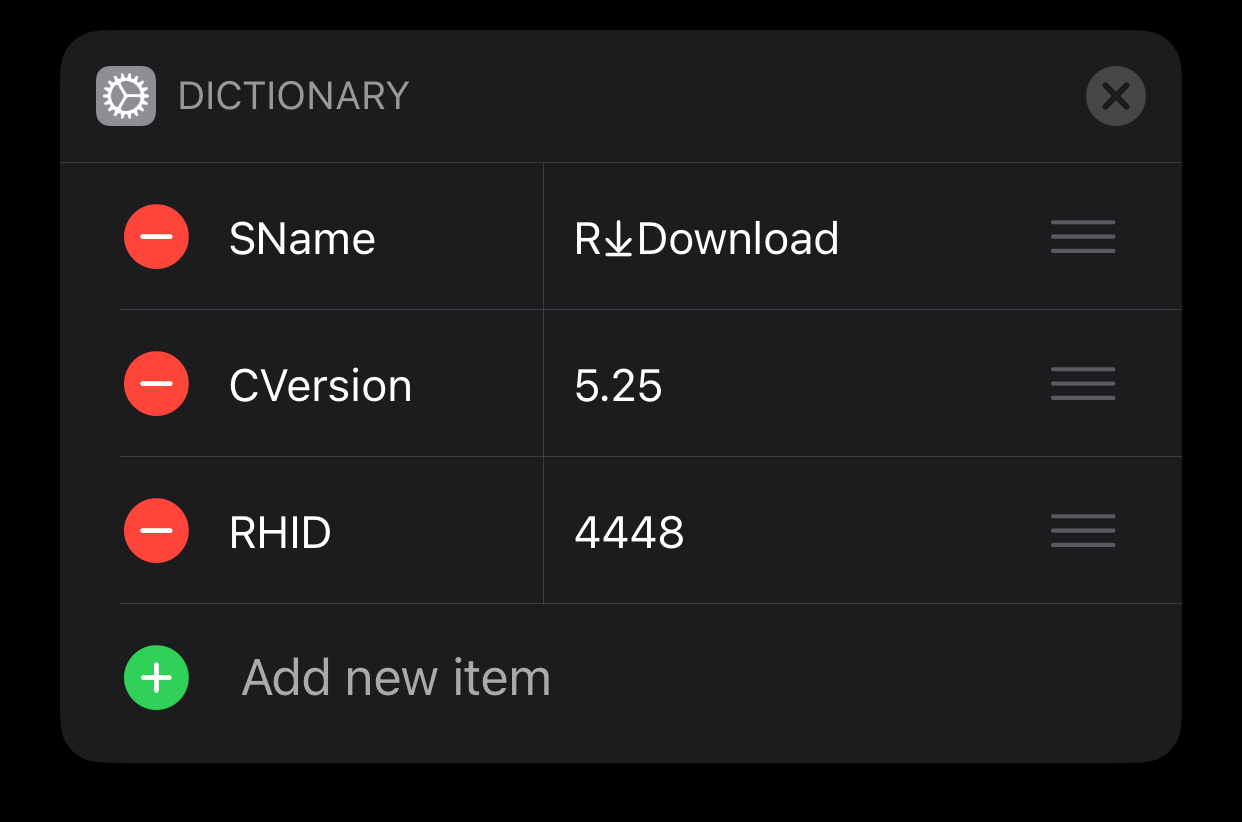 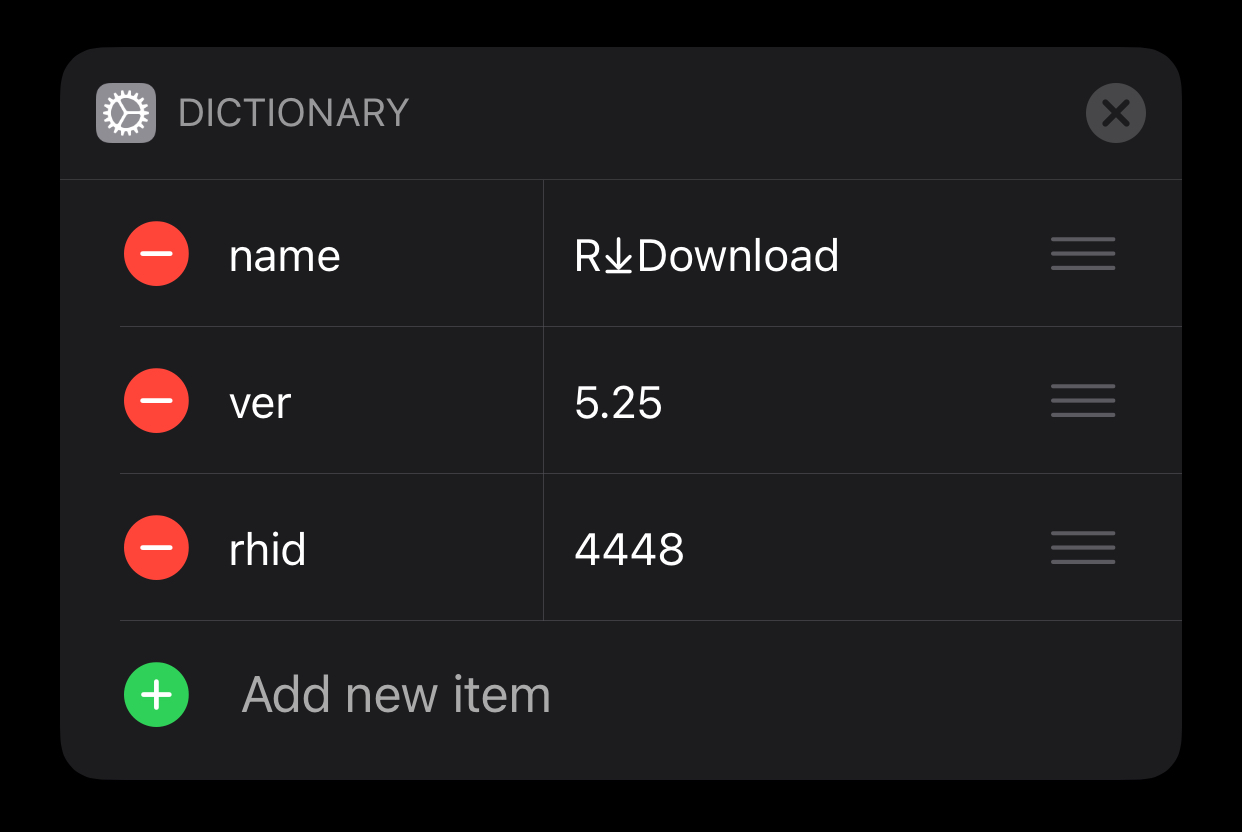 There are a lot of codes you can use there is no "condition" and if there is a dictionary that does not support it, report me about it so that I can add or fix it

Magic and functionality is possible because of R⤓Updater Engine, this JavaScript Engine allows R⤓Updater to recognize Updates from Rollbacks, one decimal from multi decimal and numbers from words. Like:

Do you want to publish your shortcut in another place? Like ShareShortcuts or in your Server? Ok, it’s alright, R⤓Updater supports the 2 most famous Shortcut Sharing Websites and even your server if you want it too!

Your version numbers on RoutineHub must match the version in your dictionary. Version numbers are numbers such as 1.5.2 or 2.1 or .6, any value with multiple numbers and decimals.

R⤓Updater is one of the few updaters that support all the type of versions, since normal versions like 1.40 to multi decimal 5.9.4 and fully worded versions like -alpha- , -beta- , -build-, -test- or -secret-, no matter what version you put, R⤓Updater will always show you that you have an Update or a Rollback.

Build Numbers are an optional feature for creators that was designed to work perfectly alongside beta updates. This will allow you to maintain the version number of an upcoming release while still pushing updates to your beta testers. When you’re done with the version you can simply remove the build numbers and R⤓Updater will recognise this is a new update, not a rollback.

As you can see from the examples below, build numbers are created by adding ”-TEXT-NUMBER”. You may replace the first part with any text you like or you can use “alpha” and “beta” which is recommended. The second part is your build number, simply start from 1 and work your way up until you’re ready to release the update to everybody, at which point you will remove all additional data and return the a standard version.

Shortcuts without Update Engine or shortcuts with 0Masking cannot distinguish between Update or Rollback !!! Which means that the shortcuts that use the Engine are able to know if it is an Update or a Rollback!!

Do you want to run specific actions depending on what the user have chosen? When R⤓Updater stops running, it will output some result codes.

You can get the information about an update or know what R⤓Updater version the user is running using R⤓Updater API, there are 2 API's:

Get Info - Get information about an update if it is available. 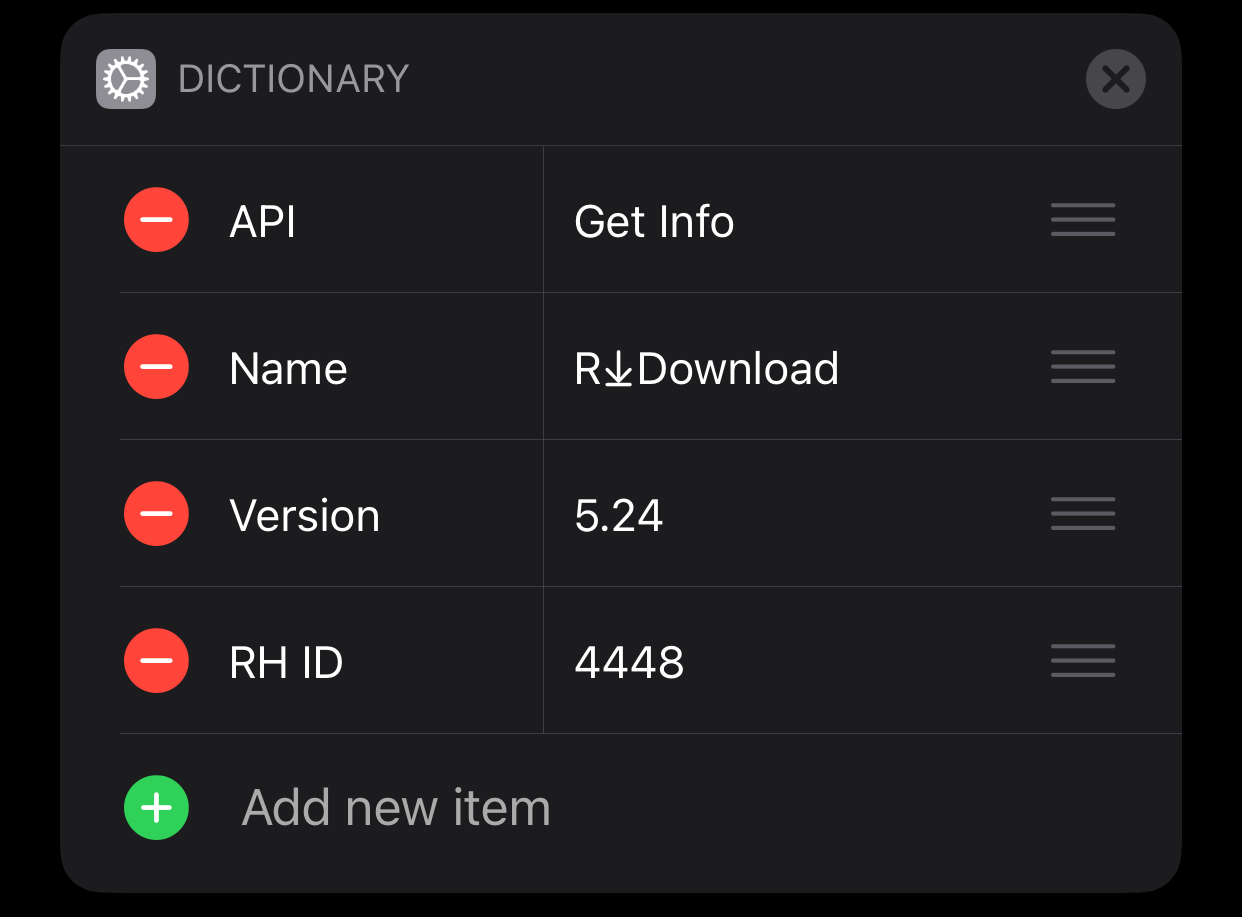 Check Version - Get the version of R⤓Updater that the user is running. 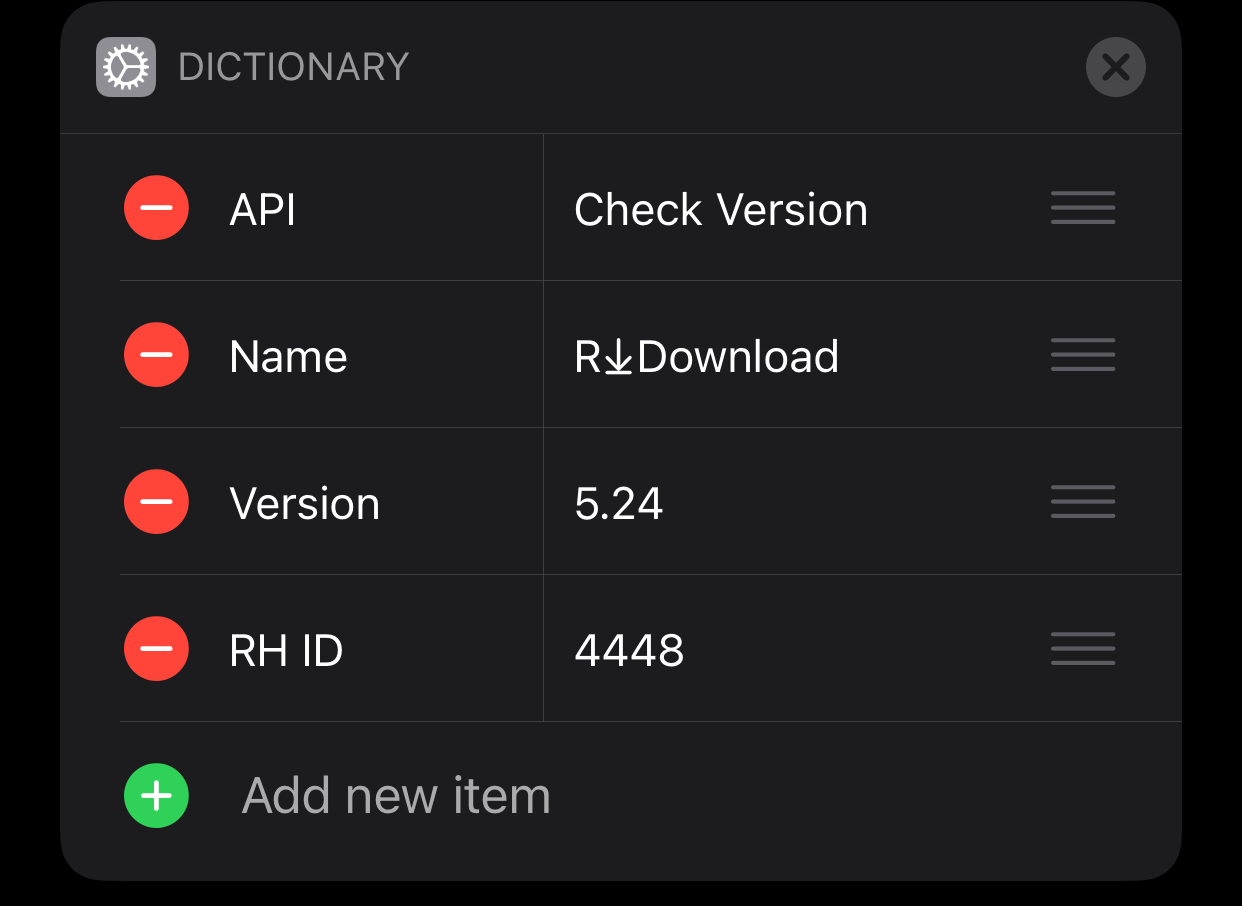 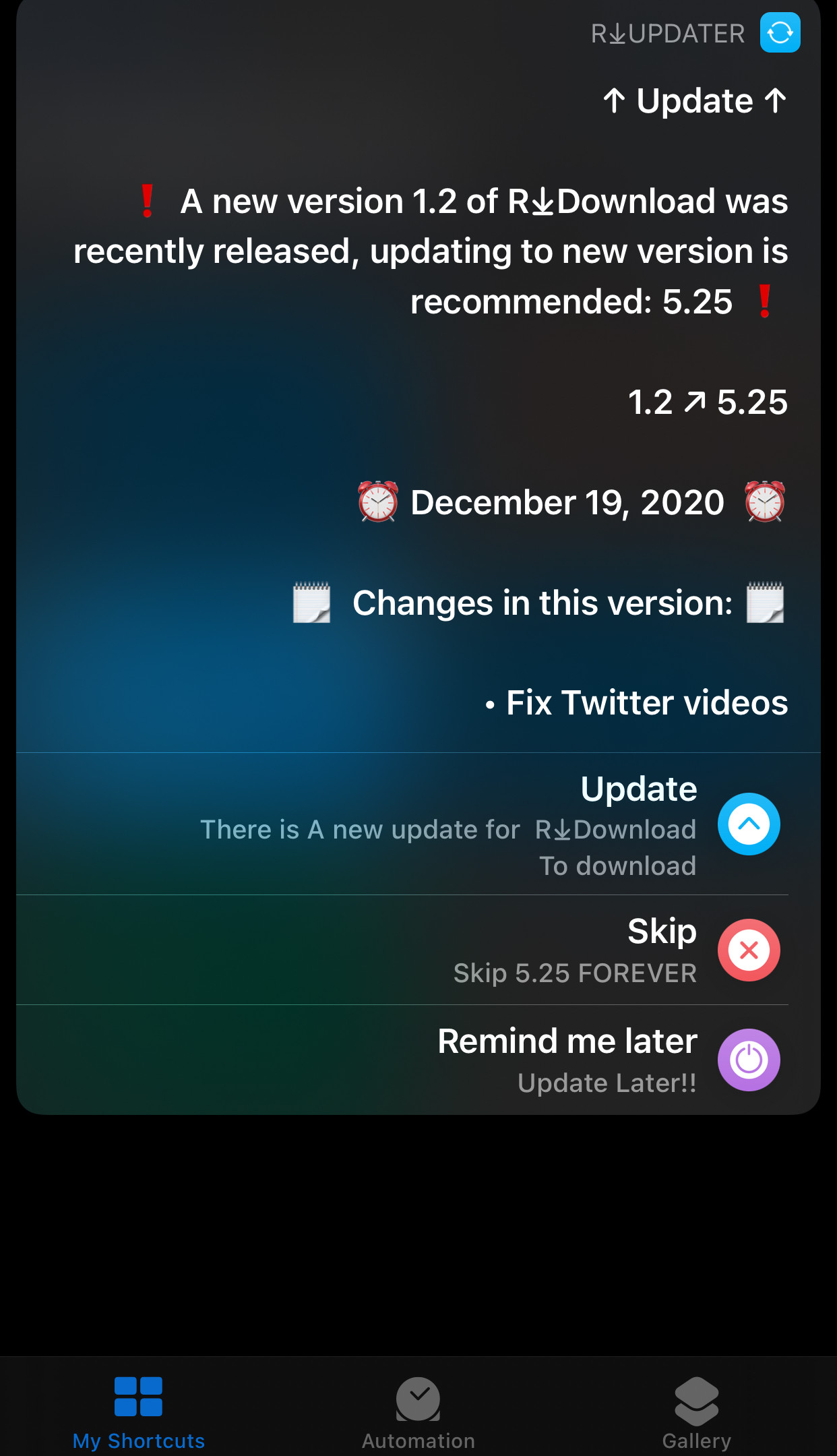 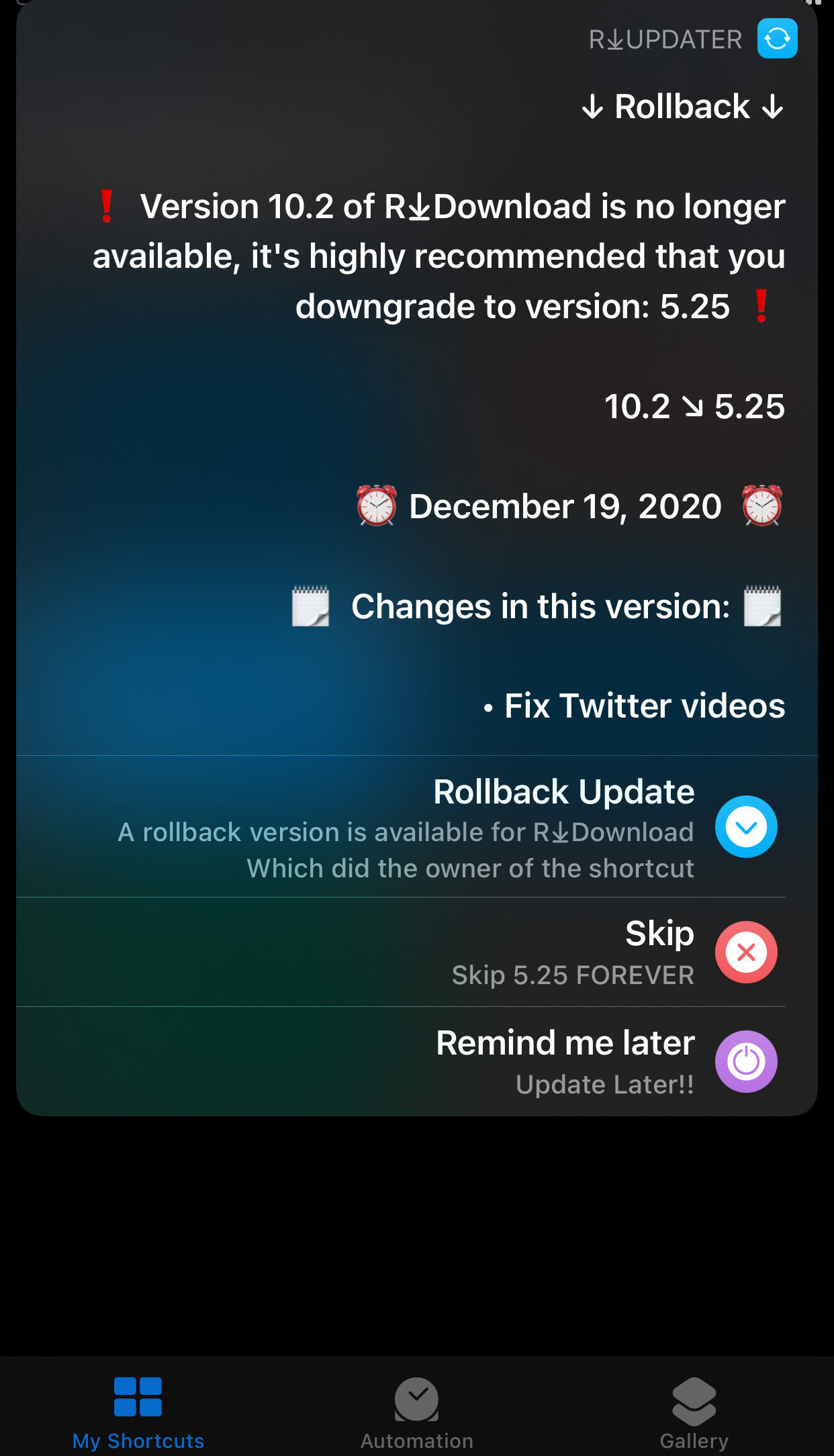 Graphics made with MediaKit